If you’re here searching how to put a sling on Mossberg 500, chances are you’re well aware of its weight problem.

On average, Mossberg 500 weighs anywhere between 5.5 lbs – 7.5 lbs depending on the model. And if you’re into security, hunting, or shooting of sorts, carrying it all day long might be a real challenge for you.

A sling is an effective means of dealing with this challenge. And that’s what we’ll be exploring in this post. We will learn:

And some tips to buy the best Sling for Mossberg 500 towards the end. So, let’s get to it.

What is a sling?

Technically, the word sling itself means quite a lot. It means:

If you’re new to firearms, you ought to know that here we’re talking about the sling, which means a flexible strap to support the weight of a hanging object. Here the object we’re concerned with is none other than the Mossberg 500.

In this context, a sling basically refers to a harness that allows the shooter to carry Mossberg 500 conveniently on the shoulder. It is also referred to as sling carry by a few users.

Types of Slings for Mossberg 500

Generally, there are three types of slings for Mossberg 500. These include:

Carry strap slings are the most widely available slings. And hence, these are more affordable too. These slings are for those who use carry their Mossberg 500 occasionally. Although they come with padding to make them more comfortable, they’re usually not crafted from high-quality material.

Shooting-style slings are designed for intensive usage. These usually feature high-quality materials like premium-grade nylon. Hence, these are also quite expensive. Further, shooting style slings divide into two sub-types. These include:

Both of these differ in terms of fastenings and attachments. Also, shooting-style slings bring about greater accuracy in handling and shooting.

Patrol slings are the cheapest Mossberg 500 slings. These are designed to assist quick usage. The strap is built such that you can easily swing it and adjust it to get into your firing position. Owing to its low price, it may not be as durable as the other two types of slings.

Now, here comes the part which has you baffled. Irrespective of the type of Mossberg 500 sling you have, the following step by step guide will assist you well:

Whenever cleaning, adjusting, or maintaining firearms, the first step should always be to clear off the ammunition.

Although there’s a safety button at the top of Mossberg 500’s receiver, it’s best you manually clear the ammunition too. Any malfunctioning of the safety button could cost you quite a lot.

So, check the magazine tube and chamber and empty the ammunition. Now, turn on the safety too.

Also read: How to disassemble Mossberg 500?

Next, you’ve to remove the barrel. For this, unscrew the screw on the magazine tube. You’ll need a screwdriver to perform this. Once it’s unscrewed, you can remove the barrel from the receiver. Note that formally, we recognize this screw as a takedown screw.

Now note that Mossberg 500 only comes with one sling mount located at the buttstock of the shotgun. Most people get confused about whether they’re supposed to use this one mount for the sling or install another.

But you need not get confused. You will need another sling mount at the fore-end of the shotgun. To install this sling mount, remove the retainer from the screw using a small flathead screwdriver. Note that you have now permanently removed the retainer.

It’s time to make some permanent changes to your Mossberg 500. Remove the butt plate of the shotgun. You’ll need good quality and sturdy screwdriver for this job.

Once done, mark an appropriate place for the rear mount on the surface of the butt of your shotgun. It’s best to opt for the opposite side of the cheek weld. You’ll have to consider whether you’re a lefty or not when considering this side.

Drill a hole of about half-inch on this marked spot. You will need a drill bit of half-inch. Clean the rough edges of the freshly drilled hole. You may need a rounded file to clean it up.

Install the QD cup with a locking nut installed upon it inside the buttstock. Ensure these are tight and fixed. Use a screwdriver to fix them firmly in place.

Before we sign off, we ought to inform you that an inappropriate sling can make it difficult to put on the sling. So, ensure you purchase the right one. A few things to consider when buying a sling for Mossberg 500 include:

You can browse the Best Turkey Choke For Mossberg 500.

With that said, by now we hope you have a clear idea about how to put a sling on Mossberg 500. In case you’ve got any queries, please feel free to reach out to us. Good luck! 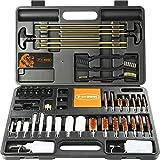